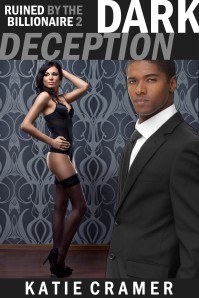 I’m thrilled to announce the latest part of my “Ruined by the Billionaire” series – “Dark Deception” is out now!

Ryan Dark has meticulously started dismantling Graham Hart’s life, seducing his wife, Jane, and tapping into his cuckolding fantasies. But he’s only just getting started…

Graham is about to experience a very public humiliation before seeing his wife become the plaything of not one, but two handsome studs. Yet the worst has only just begun…Ryan will reveal Graham’s most terrible secret, turning his wife against him completely and leading him down a path that could prove fatal.

Don’t forget –  subscribe to my mailing list if you haven’t already to get ALL future releases for just 99 cents. (Please note: due to issues with price matching on other sites, the initial 99 cent pricing is ONLY available at Amazon.)

The third and final part, “Dark Defeat”, is out in June!

I'm an erotica author from the UK who writes about strong characters who love lots of steamy sex! When I'm not turning filthy thoughts into books you can find me dancing to vinyl records in high heels and vintage clothes. Okay, maybe not all the time. Please get in touch, I'd love to hear from you!

Click my photo to visit me at Amazon Author Central.